Live is designed for creative DJs, but since version 8 it also has a built in livelooping tool. It is also the host which is most often used to host other livelooping plugins. It’s not cheap, but it’s often bundled free with hardware and there is a Lite version with a limited number of tracks.

You can quantise the loop to the current BPM, or have it set the tempo arbitrarily. It can also mute the input so the channel only plays back the loop, not the input signal.

Like any looper, you need to work with it to discover the idiosyncrasies, but like all loopers, it allows (and requires) you to develop your own voice or style. Better than that, it offers a massive rang4e of VST and built-in effects to decorate or warp your sound with. 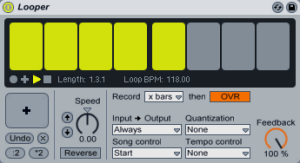 Tips
If the loop is running, it will have a BPM. If you record a new loop while play is running, it will pitch-shift your input to fit the length, so unexpected results take place, however, further as you add further loops, you will naturally play them to it the initial playback and overdubs are no longer pitch-shifted..

Midi control via foot is tricky, since Ableton won’t accept PC messages. Using loopback devices such as Loopmidi or Midi-Ox allows you to control the looper using a standard midi-pedal – see here for more information.

The play/overdub/record is controlled via individual buttons, or a single footswitch, which alternates between play/overdub, with a double press triggering stop. If you have lots of pedals, assign one to each function. If you’re limited, use the single button and get used to how it works!

For more thoughts, drill down through the menu above.